If you find yourself in summit county after winter and are looking for some hot fly fishing spots, there are plenty of areas to choose from. Whether you want to stay in the local area or travel a bit out of town to fight some slippery trout, options await you in any direction you travel. Here are some rivers and streams that may give you a head start on where to try if you want something local to fish or if you're up for a slightly longer drive:

The blue river is one of the finest fly fishing rivers in the country with designated gold medal stretches in the tailwaters in Silverthorne, CO. Flowing North, the Blue River starts at Hoosiers Pass and works through the town of Breckenridge before winding up in the Dillon Reservoir. The Dillon Reservoir dam starts the more famed sections of the Blue as its tailwaters winds along Hwy 9, running through Green Mountain Reservoir before ultimately meeting the Colorado River in Kremling.

The Snake River works its way North like the Blue River and starts at two seperate headwaters.  One near Arapahoe Basin and the other near Montezuma CO.  These two sections meet near Keystone Ski Resort and is considered open to the public as long as you practice catch and release.  Wading is easy on this river and fishing can be good along most of its stretch from Keystone to its meeting with the Reservoir in Dillon.

If you were to ask some of the local fly fishing addicts where to fly fish, it wouldn't be uncommon to hear them say Ten Mile Creek.  Located on the South side of I-70 Hwy between Copper and Frisco rests this gem of a creek.  The river is open to the public mostly its entire section.  Mostly pocket water, Ten Mile doesn't offer up 20" plus fish but holds plenty of trout in the 12"-15" range with an occasional 18" fish being caught.  This is a waterway certainly worth exploring if you don't like a crowd! 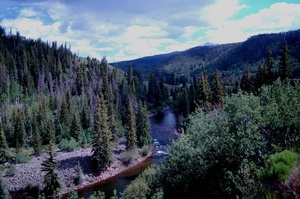 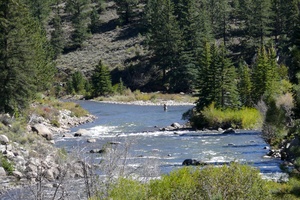