The idea of September as a quiet shoulder season month is quickly going by the wayside. Brian Waldes, the director of finance and information technology in Breckenridge, said that despite September being a “small-dollar month” revenue continues to climb.

“Those down periods aren’t so down anymore. If you’re seeing that kind of growth in September, which we kind of take with a grain of salt because it’s such a low-dollar month, but that is something that it’s indicating,” Waldes said. “It talks a lot to how busy it is getting here year round.”

Chad Most, the revenue specialist in Frisco said that the town has seen a similar trend.

“We’ve been experiencing tremendous growth here over the past couple years, and in September, as well,” Most said. “September, at least in our minds, is becoming more of an extension of summer rather than the beginning of the shoulder season.”

Most added that the town’s expectations for revenue have grown over time, but that he still tries to budget cautiously because of how unpredictable sales tax can be.

Both towns saw increases in sales tax revenue for the month, as well as continuing trends for year-to-date numbers. Breck in particular was 9.23 percent ahead of September for net taxable sales, and Frisco hit double digits with 12.39 percent in sales tax revenue.

September sales were not as kind to Dillon, which is continuing on a downward trend that started last month. August sales tax revenue was behind nearly 6 percent in the town, and September was behind 2.03 percent. Strong sales for the rest of the year kept Dillon in the black for year-to-date revenue. The town is still nearly $192,000 ahead from this time last year.

As tourists continue to come into Summit County, the busy season lengthens and revenues increase. Short-term lodging in Breck was more than $10 million ahead in net taxable sales for year-to-date sales. Sales tax revenue for hotels and inns in Frisco brought in a total of $38,028 for the month. Vacation rentals in the town also remained strong, at $218,937 ahead for year-to-date revenue.

Sales tax revenue from marijuana sales continues to trend up. Waldes said that if sales in Breck continue as they are, revenue may surpass where it was when pot was first legalized in 2014. In Frisco, the town is $167,198 ahead of where it was last year for pot revenue. 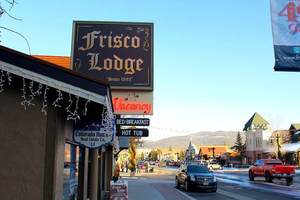