A home at the base of Keystone Resort sold for $3.05 million last week, breaking an eight-year dry spell in a town known for elusive big-money properties.

The single-family residence, located at 22 E. Trade Court, sold on April 8 to a couple from Virginia for roughly $605 per square foot, down from $700 per square foot based on the original list price of $3.53 million.

Despite a $500,000 price drop, the sale is still a milestone for Keystone. The two-story, European-inspired property is the area’s most expensive home purchase since 2007, when a log home at 0600 Independence Road in the nearby Alders neighborhood sold for $3.4 million.

Together, the properties rank No. 1 and No. 2 on Keystone’s list of most expensive home sales. Before the recent sale, the area saw just six transactions over $1 million. The priciest sale during that period was a $2.6 million home along the Keystone Ranch Golf Course, which was also the sole sale to breach the $2 million mark between 2007 and 2015.

The Trade Court home is the first property in the brand-new Dercum’s Dash development, found east of River Run Village. The neighborhood calls for 23 additional estate homes, along with an on-site clubhouse built near a private path leading from the neighborhood to the base of the River Run Gondola.

Keystone-based developer Crestwood Homes has already broken ground on two additional properties in the neighborhood, with clubhouse construction slated to begin before the end of the year. The remaining properties will be built at a rate of four to five per year over the next five to six years.

“In any development like this with 24 homes, where you’re building a community, the hardest part is selling that first home,” said Leslie Hebron of Colorado Craft Brokers, the firm selected as a sales team for the development. “It should kick off the sales season well.” READ MORE 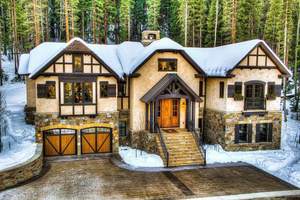