The Summit County real estate market is enjoying a sort of a renaissance — unless you own a deed-restricted home.

In early March, the U.S. Department of Housing and Urban Development released a new area median income, or AMI, for Summit County. This AMI benchmark is revised annually to help local property owners and organizations like the Summit Combined Housing Authority determine who qualifies for affordable housing.

Yet when Carina Fisher decided to sell her home in Summit Cove’s Soda Creek neighborhood, one of nearly 20 sought-after deed-restricted properties in the county, she was hit with an unexpected bombshell.

In general, deed-restricted homes tend to increase in value every year when based on the AMI, and local values were no exception until this year. Income levels don’t wax or wane as wildly as the real estate market, so when homeowners like Fisher and two Soda Creek neighbors approached the housing authority advisory board last week for an explanation, they assumed their homes were earning equity, or at least remaining static 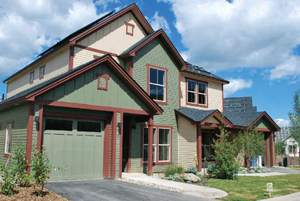