The long-vacant site of a proposed lodge at Shock Hill sold yesterday to a local developer for $10.25 million, marking the final major land transaction in one of Breckenridge’s most sought-after neighborhoods.

Found near the Shock Hill gondola station, the 6.67-acre plot was purchased by ROCA Holdings on May 15 for $250,000 less than the original list price. It had been on the market since 2013, roughly two years after former developer Fairmont Hotels and Resorts lost the property.

The hotel developer tried — and failed — several times between 2006 and 2011 to build a luxury lodge on the property, but backlash from nearby residents and a dismal real estate market stalled progress. This led to a recent revision of the Shock Hill master plan, originally penned in 1998 when development ambitions were much different than today.

“You don’t come across parcels like this very often,” says Ned Walley, the property broker and owner of Cornerstone Real Estate. “The original owners (of Shock Hill) saw a need to make a Toniest neighborhood, a posh neighborhood, and that’s how Shock Hill came to be. It’s interesting how neighborhoods evolve over time, and Shock Hill is really no exception.”

Canfield and partners also want to protect the character of a secluded alpine community: Before they break ground on the first home, they’ll set aside roughly 2.4 acres as a conservation easement. Privacy and pristine views are trademarks at Shock Hill, he says, and an easement that butts against Cucumber Gulch will protect both.

“This is an extremely unique parcel of land,” Canfield said. “It’s close to the Cucumber Gulch reserve, it’s by the gondola mid-load station and it’s right in the heart of a prestigious neighborhood. The topography sets it up for very creative, appealing development.”

While development plans are still in their infancy — ROCA Holdings didn’t have design standards or a firm number of units as of press time — Canfield says the plot is ready-made for “ultra high-end homes,” the type of luxury properties already found dotted across Shock Hill.

The developer has already selected a builder, Double Diamond Property and Construction of Frisco, and the two entities hope to build off of an already fruitful relationship. Over the past few years, they’ve collaborated on three $1 million-plus properties in the Highlands at Breckenridge, including a $3 million home featured in The Parade of Homes this past Labor Day. All three homes sold before construction wrapped up.

“There are two ways you can do it: You can build homes that are mirror images of each other, the chocolate and vanilla, or you can work with the customer to bring their personal vision to the property,” Canfield said. “These will not be cookie cutters by any stretch of the imagination.” READ MORE 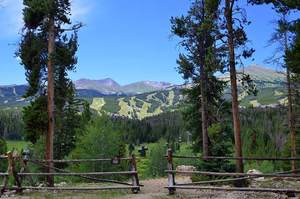