New to the Neighborhood

Moving vans and cars with license plates from other states are everywhere, and that isn't a fluke. Colorado is full of people on the move.

More than one in 10 Colorado households that filed a tax return in 2014 lived in another county or state the year before. That's more than in any other state.

Nationally, 6.4 percent of 2014 tax returns listed an address in a different county or state the year before, according to tax return data from the Internal Revenue Service.

If Colorado is a migration destination, then Denver serves as its Ellis Island, claiming nearly one in five of the households making a major move within or to the state.

Among other highlights gleaned from the returns:

• The entire metro area, including Boulder, claimed nearly two-thirds of households moving to or relocating across county lines within Colorado.

• About 54 percent of people on the move were Colorado residents who crossed county lines, while 46 percent were out-of-staters.

• Migration is an ebb and flow. Texas was the top destination for those leaving Colorado, followed by California, Florida, Arizona and Washington.

• After netting things out, Illinois lost the most households to Colorado, followed by California and New York, according to the tax returns.

Meeting in the middle

Jeff and Lauren Griffith had lived the California dream, first in Los Angeles, where they went to college, and then in a San Diego condo, where they moved after their first child, Luke, arrived. A second child, Emma, set them on the hunt for more room.

"We wanted a house with a swing set in the backyard and a garden, and we weren't going to be able to afford that in San Diego," said Lauren, 37, who grew up north of Chicago.

Around Christmas in 2014, they moved to Erie, where they rented a house with a yard for less than what their San Diego condo cost.

"If we could have made it work, we would have," Lauren said. "It was hard, really hard."

Their migration story goes beyond a search for more affordable real estate. Lauren's brother Graham Haas moved to Colorado from Illinois in 1999, drawn by his love of skiing. He fell in love and settled down in Erie with his wife, Mandy, and their kids. 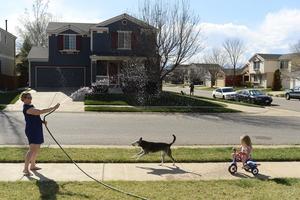