Powder Paradise...if you can afford the price

CIMARRON — Imagine we are heading to an island, says Jim Aronstein.

"And this," he says, stepping into a plush snowcat, "is our boat."

Minutes later, he is relishing his island oasis, fat Rossignol skis sending powder billowing on a gladed slope he helped clear with his chain saw.

The matter-of-fact, retired natural-resources lawyer turns into a buoyant powder hound up in his 2,000-acre paradise on the northernmost tip of southern Colorado's toothy San Juans. His grin widens with each effortless turn down north-facing slopes that spill from an 11,400-foot ridge that spans 2½ miles.

Aronstein loves undisturbed snow so much that it's the foundation of his one-of-a-kind business plan. And preserving powder is positioned above profit as he plots to partition paradise

The constitutional vision here is to retain the wilderness character of the place and to make sure there is pretty much always good powder to ski on the mountain," said Aronstein, 61, who this winter unveils his Cimarron Mountain Club — with a private ski area bigger than Aspen Mountain — as a home for only 12 deep-pocketed buyers.

"Sure, we want to recover our investment, but at the end of the day, the most important thing for us is to have a really great place — something my family will continue to participate in for generations and that will be a very special place for others as well," said Aronstein, who has no debt on the ranch. "That's really more of the reward here than a financial return."

Aronstein bought the former logging company land above the Cimarron River, in the shadow of the turreted Cimarron Range, in 2005, the day after he and a partner sold nearly 6,000 acres of lawsuit-addled mining claims on the backside of Vail ski area to Florida developer Bobby Ginn for $32.75 million.

The ranch was a getaway for him, his wife and their three sons. They spent several years bouncing up rugged roads, fishing the property's many ponds and marveling at the geology — including a basalt-fluted volcanic monolith not unlike Devil's Tower.

And they skied. The timber company had carved open swaths on a couloir-draped ridge, and Aronstein and his boys would snowmobile up and down, skiing the deep snow. They thought about a chairlift. Then they thought about carving the property into homesites and sharing their powdery Eden.

"At the end of the day, we thought it would be nice to have some other people around," Aronstein says.

But before he made a plan, Aronstein called a friend. John Norton, the former second-in-command at Aspen Skiing Co. and one-time boss of Crested Butte Mountain Resort, had gone to school at Dartmouth College with Aronstein. Four years ago, Norton visited the ranch with a plan to dissuade his pal from investing too heavily in a private ski area.

He was blown away. 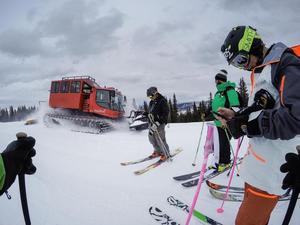