February was a choice month to sell, as continued low real estate inventory throughout Summit County coupled with strong buyer interest throughout the month.

“That continues to be a story. Inventory’s still pretty low,” Realtor Kevin Crane, of Coldwell Banker Mountain Properties, said. “We would expect, traditionally, inventory would increase as we get back into summer.”

Matching the high-demand, low-inventory trend, Slifer, Smith and Frampton Real Estate reported a 3-percent increase in price per square foot from last February’s three-month average, coming in at about $368 per foot.

Another point of interest is the fact that homes are selling at 97 percent of their list price, which Slifer, Smith and Frampton notes is the highest ratio seen in the past eight years.

Despite the trend, inventory should increase in future months, as Summit County assessor Beverly Breakstone noted. “We’re starting to see a lot of deeds.”

The existing properties on the market are selling like hotcakes, with an average of 193 days on the market, down 40 percent according to a three-month moving average.

“You’re seeing some stuff that’s been on the market for a long time, and it’s starting to go,” said Cody Thomas, a broker associate with Paffrath and Thomas Real Estate who brought in 2016’s largest residential sale of $5.675 million in March. “You’re starting to see some people who bought in 2008 put their homes back on the market. …The big sales have been trickling.”

Two of February’s top sales were located at Shock Hill Landing in Breckenridge, known for its ideal location near the base of Peak 8, and jaw-dropping prices to match. Two newly-constructed duplexes sold for $2.19 million and $2.15 million each, a steep $925 per square foot for the former.

“It’s a new project, and they sold pretty quickly,” said Jill Begley, a broker associate with Coldwell Banker Rounds and Porter. She sold the $2,195,000 duplex on Feb. 11.

“I think you can fall out of your door, essentially, and end up on the gondola,” she said. “Shock Hill’s kind of gone over the top. There’s just no question, when we see these, we go ‘Wow!’ These have sold between $1.6 and $1.8 million.”

The duplexes, standing at 2,734 square feet, include four bedrooms, two living areas and a two-car garage, as well as an on-site caretaker.

Another top sale for the month came in at $1.75 million, for a 4,788 square-foot home located at the Highlands at Breckenridge. The brand-new home was finished in September of last year, just in time for the parade of homes.

“We wanted a mountain modern look, with some rustic elements,” Crane said.

The home, located at the end of a cul-de-sac with access to the nearby golf course and hiking trails, features historic barnwood and metalwork by local builder Bill Snead of WTS Construction.

“It was a unique opportunity for him to do the hands-on metalwork by himself,” Crane added. READ MORE 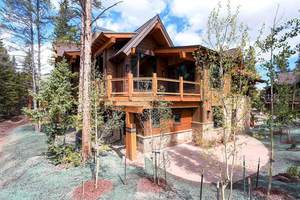