If you live in Summit County or visit often, you’ve noticed what seems like significant jumps in weekend foot and vehicle traffic.

The Colorado Department of Transportation (CDOT) confirmed a record number of commuters — more than 1.3 million — traveled through Eisenhower Johnson Memorial Tunnel along Interstate 70 during just the month of July, many of who were headed to, or at least, stopping in Summit. That’s more than a 7-percent upswing (almost 87,000 more cars) over the same month total for 2015. It was last year that the tunnel also experienced an all-time high in a single year with 11.8 million vehicles.

“Man, it’s been packed in the towns,” said Thad Noll, assistant county manager. “You just feel there are more people here, whether it’s Breckenridge or Frisco, Dillon — there’s more people. It’s backed up with ‘Yikes, those are big numbers.’”

The news corresponds with consistent word that the Denver metro area is increasing in population at a much faster rate than the national average. According to U.S. Census Bureau data, while the rest of the country saw steady growth of 0.8 percent, Denver expanded by 58,500 people, or 2.1 percent. That’s more than 1,100 flooding the state per week, which is on par with past annual surges as well.

“That kind of growth equals more people traveling up here,” said Noll, even if one might assume Summit and other mountain communities would see that born out more during the winter. “This is not an anomaly — the summer volumes are higher. The difference is the traffic is spread out through the course of the day.”

Whether it’s the result of Colorado’s booming population — some projections see Denver’s populace ballooning from its current 5.5 million people to between 8.7 and 10.3 million by 2050 — or of seasonal variations like a positive economy, low gas prices or milder temperatures at elevation, the fact is passenger travel on the state’s mountain corridor is on the uptick. And it’s not likely to end any time soon. 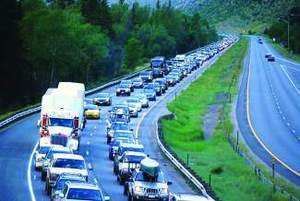