After years of diminishing returns and frustrated tenants, Main Street Station at the base of Peak 9 has a new owner with a new vision for retail on the south edge of Breckenridge.

The property, home to 20 commercial units totaling 34,400 square feet, sold on April 24 for $5.6 million to an investor group led by Brent Martin, an Austin-based real estate manager who lives part time in Breckenridge. It’s the second-largest sale in Summit County this year behind a$9.2 million affordable housing complex in Silverthorne sold in March.

By 2014, First Allied lost the property to foreclosure, due in large part to haphazard management and tensions between the landlord and tenants, Wolfe said. The firm wouldn’t return phone calls for weeks at a time, and when tenants struggled through the thick of the 2008 recession, they saw little support from the East Coast landlord.

“You have to treat your tenants like they’re customers,” said Wolfe, who also owns a commercial real estate firm, Wolfe and Company in Breckenridge. “They aren’t just here to give you rent money. When you’re a remote landlord with very little presence, you don’t have weekly meetings or walk the property once a day, really become their advocate.”

Main Street Station is currently home to 10 retailers and restaurants, or roughly half of its original capacity. That makes it one of the quietest properties in town, despite a prime location near Maggie Pond with constant foot traffic, even during the lean shoulder seasons. The complex has five buildings total, with a sixth building under construction on the far south end. 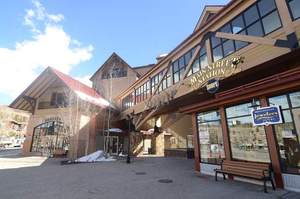