“It was just time to do something different. … I just wanted to spend some time with my family,” Kim Rappleye, the previous owner of the property said. “I think they’re gonna keep it just how it is.”

Summit County Assessor’s records show that Silverthorne Investors purchased the property on June 30, 2015. According to the Colorado Secretary of State, the Denver-based company was formed on June 15 of this year.

“It was an opportunity to get into Summit County. We believe in the longevity of the area,” an agent with Silverthorne Investors said. “The plans are to maintain the gas station, 7-Eleven and the hospitality area.”

“It’s a fantastic location. The gas station is always full because people pull right in,” Summit County Assessor Beverly Breakstone. “What we’ll want to figure out is if there is really an increase in land value when you’re right off the highway exit. … it’s gonna be a test to figure out how much of that $7.25 million is business value.”

Silverthorne Investors said that the transaction was conducted as a 1031 exchange, an investment swap that would postpone capital gains taxes until the investor decided to cash out. The funds are put into an escrow company until the buyer is ready to acquire all of the property.

“We think it’s a great long-term goal for the future just because it’s so valuable,” an agent with Silverthorne Investors said. “It’s the first gas station right when you go off the highway there in Silverthorne. It’s pretty popular.”

Breakstone added that the 1031 exchange was a smart move on the company’s part.

The land was last purchased in 1993, for $800,000 from the former Amoco Corporation, an oil company that merged with BP Global in 1998. Rusty Inc., a company formed by Rappleye and other investors in 1978, came to own the property for the next several years. As the owner of the gas station, Rappleye leased the remaining property to the convenience store and restaurant next door. READ MORE 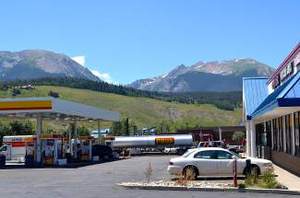