It’s all over the news and impossible to ignore: Colorado has legalized recreational marijuana. USA Today recently published a story about how joint-rolling and Dorito eating are among anticipated pot-themed contests at the Denver County Fair in August. It seems Colorado has become the butt of a few jokes the last few months.

No matter where your personal opinion lands on the new law, if you’re a REALTOR ® in Colorado, you’ll eventually have to deal with client concerns and questions brought about by recent media hype and what legalization of the drug means for them.

In general, municipalities and people across the state seem less concerned about the consumption of marijuana and more concerned about how to handle recreational pot sales, tax income, and what it means to neighborhoods where pot shops might open up. Opponents argue that recreational pot shops will traffic in more crime, and eventually bring down property values. The biggest issue REALTORS ® will face is how the law influences their buyers.

“Some people don’t want to come [to Colorado] with their families,” says Joyce Burford, executive director of Colorado Association of Ski Towns. “Because they have this image that all these pot smokers will be everywhere.” That’s not happening, she says, and “I don’t think that’s going to happen.” 5

Knowing the facts about the new law will help you reassure any clients hesitant to relocate from out of state or local clients who are curious about how the new laws will affect them. 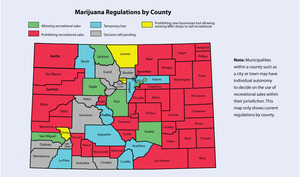