A hotly contested development planned for the northern end of Silverthorne is now on temporary hiatus after dozens of residents pleaded with town officials to stall construction, citing everything from impacts on wildlife and conservation to the threat of urban sprawl much like the Roaring Fork Valley.

For nearly three hours, the Silverthorne Town Council heard from locals opposed to the South Maryland Creek Ranch proposal, a residential development that has seen one zoning change and grown by 60 acres since it was first brought to the town in 2005.

The second and most controversial update was proposed nearly a year ago in May 2014. When submitted, it received hardly any fanfare despite a noticeable increase in the number of homes: Developer Maryland Creek Ranch wanted to triple the original number of units, from 83 units on 416 acres to 240 units on the same amount of land.

Along with the addition of a private pond and 20-acre park, the newest version of the proposal boosts density from one unit per 5 acres — a ratio first agreed upon in 2001 when the town revised its comprehensive plan — to 0.57 units per acre. Read More 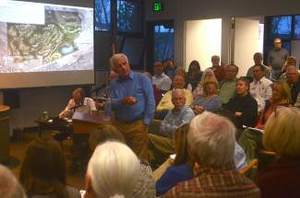