While 2015 closed with unseasonably strong sales across the county, January sales dipped slightly due to a lack of property on the market. Jeff Moore, managing broker for Slifer, Smith and Frampton Real Estate, noted real estate inventory is currently at a six- to seven-year low, though demand is still strong.

“Skier traffic leads to more potential buyer activity in the marketplace,” he said. “They’re in town, enjoying time with their families and enjoying time on the mountain. Those types of experiences lead to people thinking, ‘We should look at something in the mountains.’”

January has historically been a slower month for sales. But this winter has been as busy as the limited inventory allows.

As for the driving factor behind the lack of listed properties ... it depends on who you ask.

“In some respects, it’s a good endorsement of our market because we have a lot of people who are happy,” Coldwell Banker broker associate John “Turk” Montepare said. “I think people who have bought in or stayed in for the long haul are very happy with what they’ve got here in Summit County.”

While he would normally encourage homeowners to wait until April to put their property on the market, when demand begins to peak, he said he was comfortable listing properties now between a strong selling market and lack of inventory.

On the other hand, Brooke Roberts, director of sales and marketing for Land Title Guarantee Company, interpreted the paucity of listings in a different light.

“I think people are waiting to see what the market’s going to do,” Roberts said. “They put it on a rental program in the wintertime, and they’re waiting for the summer sale season. This is a really, really record low inventory that’s out there right now.”

According to a market analysis by Land Title Guarantee Company, the monetary volume of sales countywide was down 5 percent this month compared to January 2015. The total number of transactions was down 2 percent.

Even with total sales down for the month, both Roberts and Montepare noted that high-priced transactions, above the million-dollar mark, are climbing.

“We think a lot of people are pulling their money out of the stock market and investing in real estate again,” Roberts said, pointing to the weakening stocks in the first quarter of 2016.

At $2.72 million, January’s largest sale is an example of this market. The five-level home, located in an extension of the Yingling and Mickles Subdivision, overlooks all of Breckenridge from its perch on a steep slope.

“The views were breathtaking,” Montepare said. “You could see really from Pacific and Helen all the way to Buffalo.”

The 5,200-square-foot home features four bedrooms, four bathrooms and two large living areas all connected by an elevator. The traditional mountain-style home was by local architect Suzanne Allen and constructed by local builder Bob Blass. Montepare added part of the home’s value was in the quality of the build.

“Bob is a very good builder; I’ve had some great success with him over the years,” Montepare said. “Since house was on smaller lot, we thought some of our buyers were very busy and don’t want a lot of landscaping. You can come in, spend five days and leave. And you’re not worried about cutting the grass or raking leaves.” 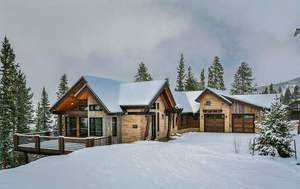