Urban Renewal in the Rockies: Silverthorne seals the deal on new developments

Business is booming in Silverthorne, with several new developers streaming in following the end of the recession. While many of the pieces are in place for urban renewal, the town is pulling together plans for a revitalized downtown.

“We’ve got incredible recreational offerings … great neighborhoods, great parks, great nonprofits, we have the FIRC, great businesses, we have all of those things — and then there’s this square right in the middle, it’s sort of missing,” said town manager Ryan Hyland. “There’s just one piece left.”

The town’s older city center is ripe for renovations, encompassing an urban renewal district. The district stretches from Interstate 70 to 6th Street to encompass the downtown area between Rainbow Road and Brian Avenue.

“We really narrowed it down and focused in on the town core,” said assistant town manager Mark Leidal, executive director of Silverthorne’s Urban Renewal Authority. “This is where we see potential for the development or redevelopment of some of those parcels, because this community has been striving for that walkable downtown for quite some time.”

“We’re just building on some of the building blocks we already have — the pavilion, the recreation center and the town hall,” Leidal said.

Hyland and Leidal have worked on urban renewal plans for the town for several years. But, it wasn’t until the end of the recession that they began to see the results of their work.

Silverthorne’s Urban Renewal Authority was created in 1996, with an overarching plan for growing businesses and infrastructure throughout the town. The plan was updated in 2008, with a map that broke the long, linear town into more manageable sections, each with its own design standards.

“Then the economy went south,” Leidal said. “We didn’t see any true development within those areas.”

As the recession continued, the town used those years to draw up its current plan. In 2011, Downtown Colorado Inc. put together an assessment, giving the town more ideas on how to approach development. The area of focus became Fourth Street, connecting a planned brewery with the recreation center, pavilion, town hall and upcoming theater nearby.

The urban renewal plan takes into account that Silverthorne’s core is more difficult to develop than other parts of the town, with higher land values and greater infrastructure needs. The Urban Renewal Authority allows the town to offer developers incentives, to encourage new business.

“It’s going to take quite a bit of public-private investment into those areas to make that a reality,” Leidal said. “But, those plans are in place, giving us a roadmap.”

The Bakers’ Brewery, remodeled from an old Village Inn, has seen significant success under the town’s urban renewal program. The brewery, which opened in March, is seeing more and more customers line up for its fresh bread and beer.

The site is part of the urban renewal area, with the business receiving a $10,000 grant and a seven-year sales tax incentive program from the town as incentive to improve the site.

“We were to some degree partners with them, and were very excited by that reuse,” Hyland said.

Co-founders Stephanie Sadler and Cory Forster picked the location for its visibility from Interstate 70. They put in the offer in October 2013, refurbishing the building’s interior before opening.

“It’s just having something new and different in Summit County,” Sadler said. A lot of people in Silverthorne never felt like they had their own restaurant down here.”

Another brewery, Angry James, will open on the opposite end of downtown next year. The owners will also partner with the town to assist with constructing a large, 6,000-square-foot building up to the new standards.

Sauce on the Blue, a new Italian restaurant, will also open within the urban renewal district, filling a vacant restaurant space in the near future. READ MORE 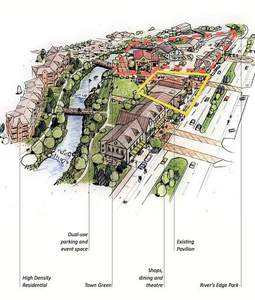