While there’s no crystal ball for the future of housing, Lawrence Yun’s predictions might be the next best thing. The National Association of Realtors chief economist and senior vice president of research shared his forecast for Summit County on Wednesday, with job growth as a positive indicator for the market, while low inventory and rising prices weighing in as negatives.

One of the major factors is Denver’s recent booming growth, which he says shows no sign of slowing.

“There are way too many buyers going after far too few properties. Denver and Seattle are just going wild,” he said. “Whatever happens in Denver will come over here.”

With Denver’s population rising exponentially, Summit County is also seeing a larger pool of buyers. However, local housing inventory is still at historic lows, with limited construction in Summit.

“Why is there low inventory in Summit County?” Yun asked. “Because builders are not building.”

Part of the reason behind that, he added, stemmed from state policies that don’t encourage builders to construct. While he forecasted inventory would climb a little bit in the future, it was not by much.

“They will be slowly vamping up production,” he said.

Like many industries in Summit, real estate is seasonal — to an extent. During the winter months, many homeowners will hold onto their properties for short- or long-term rentals but will be ready to put their homes on the market come spring.

This year, however, the market is not seeing the same springtime inventory surge.

“We seem to see listings come, but they’re almost being sold as quickly on the market,“ Summit Association of Realtors board president Tom Harmon said. “Back when I started, it was normal to see 1,700 to 2,000 units on the market. Last time I looked, inventory was almost to 600.”

Resort communities are also faced with a unique problem: limited space. As Summit nears 93 to 94 percent build-out, available land for new properties is shrinking. With Denver at seventh in the nation for population growth, that will likely make for a larger pool of prospective buyers in Summit.

“Those people are going to look to the mountains for recreation,” Harmon added.

What’s driving so many prospective homebuyers to Denver? According to Yun, the key is the cost of living, with increasing costs in San Francisco driving tech workers elsewhere.

“People just can’t afford to live in San Francisco,” he said. “Compared to the prices they were paying, (Denver) is very affordable.”

Of course, Colorado locals would have a different perspective, as they see prices rising. Home costs in the metro area are at a new high, while rural Colorado is not quite back at peak levels.

“Denver has reached a new high, but Summit County has not,” he said. “Hopefully, we will get a delayed reaction from what’s happening in Denver in Summit County.”

Summit’s proximity to the metro area is certainly an advantage in this aspect, compared with other resort towns further west.

Another factor feeding into sales is the local job market. The state as a whole is above average, Yun said, though Denver is doing well. Despite fluctuations due to seasonality, for Summit, the overall trend for new jobs is steadily increasing. READ MORE 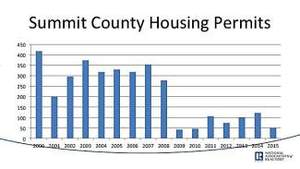